Don't get me wrong.  I love the idea of Financial Independence (FI).  I'm just a bit skeptical of the cult following that it seems to have created.  Sure, it takes a massive leap of faith to embark on the journey towards not having a job, living off your own investments, etc.  But that isn't anything new.  I mean people have been trying to do that since the dawn of time.  Sorry, FIRE folks... You didn't invent this.

Every new generation wants to take ownership of something for themselves and this is no different to the current millennial or Gen Z demographic.  The most popular concept is to break free of the world of employment at an early age and don't do what your parents did.  Sure, I get that.  I mean I was a rebel then too.  But the fact is that financial independence dates WAY back in time, and I'm a bit skeptical as to whether someone young understands what it takes to get through a bear market.

We have been in a bull market for about the past 10 years.  This is not normal.  Generally we would expect swings every 5-8 years or so, but this one has stayed.  Most of this has to do with artificially low interest rates, but that can't last forever.  Considering that the first house mortgage I got was at about 12% interest, I'd say that the current < 5% interest rates makes it less than half as difficult to own a home today as it was 25 years or so ago.  And sure, investments are not yielding that much as a return but the stock market is.  The DJIA has increased 25x what it was in 1981.   That tells me that if you had money in the stock market, and bought a home, you'd be in a pretty comfortable place right now.

And unemployment is really low.  So finding a job to generate income isn't as hard as it once was.  That means you can sock away money like crazy because you are in demand.

History has a nasty habit of repeating itself

About 90 years ago, this was a day in the life for the average worker 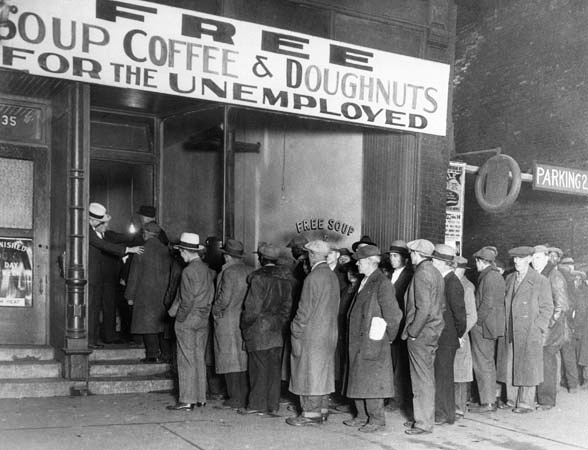 When the markets turn and unemployment starts to rise (or return to "normal" levels), then things will be a lot more difficult to get to FI or even support a FI lifestyle.

If we see a market downturn, then we could see a reduction in interest rates, but a tightening of credit.  This would mean a lower return for anyone who is at FI and relying on a 4% deduction of their investments.  Stock markets crash.  Yep, it has happened many times before:htttps://en.wikipedia.org/wiki/List_of_stock_market_crashes_and_bear_markets

Australia as an example

I'm an ex-pat Australian, who has lived in the USA for 25 years.  When I left Australia in the 1990s, the economy was in recession and things were tough.  Jobs were not hard to find and housing prices were relatively low.  A family of two could survive on about $3,500 a month in style back then.  I returned to the USA because the economy was much better.  This was around the time of the Dot Com boom.  Of course that didn't last after 2001.

But while the USA went through the 2001 stock market crash and getting work in technology was hard since everyone still had a bad taste in their mouths from the dot com crash, we persisted.  While that happened, the Australian economy turned around, driven mainly by resource demand from China.  That demand turned Australia into a long term bull market.  About 27 years of positive GDP.  Everyone bought nice new, shiny cars, housing prices went up, flat screen TVs for everyone, etc.   Meanwhile they kept digging up the iron ore, LNG, etc. out of the ground and shipping it off to China.  Times were great.

Then around the 2nd half of 2018, the wheels fell off.  The housing market had become so ballooned, that you couldn't buy a small 3 bedroom home in Sydney for under $1.5 million.  Salaries had risen to record levels, but that all started to pull back and reduce.  The Australian government tried to keep the good times rolling by opening up immigration, since China wasn't buying as much resources after the 2008 crash wiped out demand from the US.  And now the average Australian finds themselves without a chair and the music is stopping.  Banks won't refinance mortgages after they were caught in a scandal.  Housing market is dropping in record numbers each month.  The expectation is a 40% drop in real estate values.  Unemployment on the rise as companies are stopping new projects and hunkering down for the winter.  Exports may get a boost with a declining $AUD value, but that will come at a price for the local citizens since buying anything that is imported (and that is most of the Australian consumption base) will cost more and more.  Inflation on the rise, salaries on the decline and mortgage defaults everywhere.  Welcome to the bear market (maybe a crash).

Good times turn to bad pretty quickly in economics.  And everyone tends to get hurt by it.  The rich may be able to whether the storm and acquire more assets at record low prices.  But that requires that you have surplus liquidity to do it, and that's where it gets tricky for those on or journeying towards FI.

A better option would be "Financial Sustainability"

If you find yourself without a job, in a market where there are few jobs, and your skills are rusty so you are not competitive, it is a horrible place to be.  Sure, FI people don't want a job.  But if investment income is deteriorating, or inflation is on the rise, how do you balance out the calculations you made to live off savings?  The numbers all change and mess with forecasts.  I'm not saying you should not strive towards FI, but you should do it in a far more sustainable manner.

It would be better to not focus on the numbers at a meta level, but to look at what your monthly financial needs are and find a way to generate that income without having to work.  Not that you can't supplement it with investment income, but you still need something that generates cashflow.  Like rental properties, or business ventures, or something that you can enjoy doing that will create income rather than dividends off capital that you are relying on market factors to dictate the returns on.

The reality is that young & retired can be a death sentence for many.  People need to do something constructive with their time, but they don't want to be forced to do it for a boss or against a timeline.  If you have passive income working for you, then you control that timeline.  You can amp it up, or scale it back.  But if your basic expenses are covered by passive income, you don't need to think or even use the word "retire".  Retire is a finality that doesn't sit well with me.  Freedom is a far better objective, in that you can be active, engaged and doing what you want, but without the complete removing of generating income.  Income generation is fun if you are doing something you love to do, but even if you don't want to "Do" anything, a passive income coming from rental real estate, vending machines, business investment, etc. would allow you to continue to generate income without the exposure to the movements in the market that could destroy your income and ruin your calcuations.

Make sure your calculations for FI factor in a bear market.  There should be as much time spent in bear markets as there is in bull markets.  If you are young, and enjoying the current US bull market, just remember that you shouldn't be patting yourself on the back too much just yet - that market will turn and when it does, you will be surrounded by your peers freaking out about money, etc. and hopefully you are sheltered from that storm.  As someone who has been around the block many times, so to speak, if you haven't been through a demise of your businesses, etc. then brace yourself because it will happen to most of us at least once in our lives.  These good times won't last forever so don't start to make assumptions that they will and expose yourself to the downside.

Bear market FIRE strategies - Can you handle the truth?

The bull market we’ve had will be ending soon. This is just natural. Markets go up and markets go down. The bull market has been active since about 2010, fueled by low interest rate money but with the natural market cycle spurred on by the China Trade Wars, it won’t last much longer. What should those pursuing FI or FIRE do to adjust? Do they have what it takes to handle this?

It is time to get real. You've been told to pay attention in school, get a degree. Then get a good corporate job so you can enter the middle class. Well I'm here to tell you that it often doesn't work, and what you need to do to rethink that approach in the 21st century.